Imani Campbell is the EIC and founder of Royal Rose Magazine.

They are a non-binary (they/them) lesbian poet that have a love of helping people. In May of 2018, Imani released their first full-length poetry collection, “Feel. Forgive. Forget.” that you can find here. Their work has been included in Rhythm & Bones YANYR anthology and Rose Quartz Magazine. When they aren’t writing or editing, you can find them binge-watching Impractical Jokers! You can find them here on twitter, instagram, and tumblr.

Sarah Kersey is the Assistant Editor of Royal Rose Magazine.

She is a poet, musician, and x-ray technician from New Jersey.  She is an associate editor for South Florida Poetry Journal (@soflopojo on Twitter). Additionally, she was a guest reviewer for Aji Magazine’s Fall 2018 issue. She tweets @sk__poet. 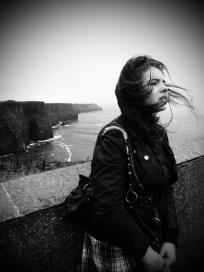 Annabel Mahoney is the Creative Director of Royal Rose Magazine.

She is the chief editor of Wellington Street Review, a writer and essayist based in the UK.

She has won numerous prizes from bodies such as the Human Rights Watch, The Literary Association and Forward Poetry.

Her debut collection Wyf-King is scheduled for release in Winter 2018/19 by Lapwing Publications. She is currently collating material for her second book, which focuses on the relationship between Shakespeare and medievalism in the First World War.

Kate Wilson is the Interview Editor for Royal Rose Magazine.

They live in Salt Lake City, Utah and is a senior at Westminster College. They are the Editor in Chief of Issue 56 of ellipsis… Literature & Art, and work as an interview correspondent with Half Mystic Press. Three of their poems were selected for the Academy of American Poets Student Poetry Prize and their work can be found with Pressure Gauge Press, The Albion Review, and Parentheses Journal, among others. They are on Twitter @pasta_slut and can be found at https://wilsonkatherine77.wixsite.com/mysite.